Ross Castle is situated on the edge of the Lower Lake of Killarney. It is a typical example of the stronghold of an Irish chieftain during the Middle Ages. It was built by the O’Donoghue clan in the 15th century, a time of economic depression, Black Death and famine.

The castle which was inhabited by the chieftain and his family is very simply decorated. The main function of the castle was to defend and this is evident in the many defensive features including the narrow windows, strong oak doors, spiral staircase and the murder hole!

During the guided tour you will visit the entrance area, the family bedroom, the servant’s room, the justice room and the very interesting toilet! The magnificent banquet hall at the top of the building was the centre of activity of the castle. You will also get to see many beautiful examples of 16th and 17th century oak furniture. The extremely basic and difficult life of those who lived in the castle becomes very clear as you move from room to room.

The castle was attacked and taken by Oliver Cromwell’s army in 1652. Thankfully it was magnificently restored in the late 1990’s.

After the tour you can take a 15 minute boat from right outside the castle to Innisfallen Island. Here you will see the remains of a 7th century monastery and a 12th century church. The peaceful 40 minute walk around the island takes in breathtaking views and lush vegetation. The trip to the island is a must! 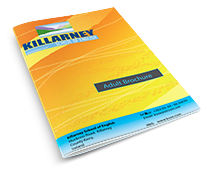 This message is only visible to admins.

Error: An access token is required to request this resource.
Type: OAuthException
Solution: See here for how to solve this error
MENU